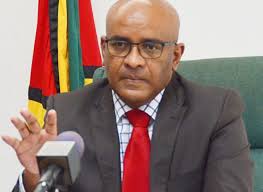 Racism does not seek to divide. Where there is racism, a divide already exist. No one engages in public behaviors like this without knowledge that it is culturally shared. We need to stop reacting with romantic and cliched responses that empowers and enables rather than dispel and reject. The racist personality feeds off our anachronistic and pandering kumbaya responses to thoughts that threaten our very existence.

I will continue to argue that the very existence of black people is under threat in Guyana, and I base my contentions on both speech and actions emanating from the PPP. Speech that convinced their ethnic supporters that Guyana is Indian Country and they must “chase us out”, and actions that saw more than 400 black men lynched by gangs associated with the PPP, under a Government of the PPP, with no condemnation by the PPP, and no judicial accountability for Capital crimes of Conspiracy to commit murder and mass murder.

The evidence upon which such sentiments are founded are verifiable, incontrovertible, and irrefutable.