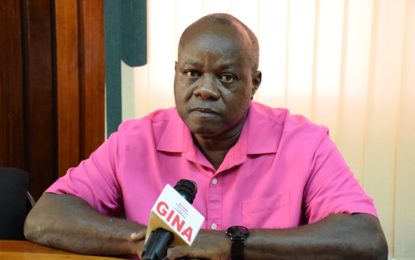 The recent call by the PPP controlled PSC Chairman Gerry ‘Lewis’ Gouveia, who benefited significantly from PPP patronage and largesse, for the national recount to be aborted is a clear manifestation that the PPP has no interest in the people of Guyana, democracy and free and fair elections. It is all about the money that the PPP elite, and their friends, family and allies in crime hope to make now that Guyana is an oil producing nation.

It is also interesting that the PPP did not make the call to abort the national recount it self. It used one of its puppets to make the call. They know full well that they couldn’t agree to a national recount and then condemn it as “ a waste of time. “ But since when principles matter to hypocrites? Or is it a case of barefacedness that not even a hypocrite will try? I think it is the latter. Let us forensically audit every box and let the truth about PPP rigging come out. I believe at the end of the process the APNUAFC will win with a wider margin.

It appears as though the PPP has been able to dupe some members of the diplomatic community here in Guyana, with the help of their high paying allegedly corrupt US lobby firm Mercury Public Affairs into believing that they are champions of democracy. They are not. They are the same old dictatorial cabal that wielded power arbitrarily for 23 years in Guyana and destroyed whoever was in their way regardless of ethnicity, religion or any other consideration.

It is clear that Jagdeo and the PPP are not concerned about free and fair elections and democracy. They are concerned with getting power at all cost and accessing the resources that will come from the oil and gas industry.

In recent times, the PPP misused and abused the judicial system at every turn. Now, it seems that they do not believe that the Coalition government and its supporters have the right to seek justice in our courts. We do.

The call by Jagdeo for sanctions to be brought against Ms. Ulita Moore and her lawyers because they exercise their democratic right to judicial review tells all and sundry the nature of the beast we are dealing with. They believe they alone have rights. No other must have the courts deliver justice. The same attitude they displayed while in government. This is an attack on our justice system and must be condemned by all law abiding people.

It should be obvious to all that Jagdeo and the PPP continue to be dictatorial and that they are bad news for Guyana if they get close to state power again. It is worse when it is recalled that he has threatened all with retribution and recrimination if he wields power behind his puppet presidential candidate.

I invite the international community to revisit their own records of the PPP in government. Such a visit to your archives will of necessity remind you that the Jagdeo led PPP had transformed Guyana into a criminal state in which drug lords were allowed to be the law and many innocent Guyanese were murdered. That corruption was the order of the day. Many crimes went unsolved and the Guyanese people were deprived of justice. A visit to your archives will reveal that it is Jagdeo that needs to be sanctioned for his crimes against the Guyanese people. Moon a run til day catch um.

It took President David Granger and the APNUAFC to restore law, order and the independence of the judiciary. And, to improve the investigative capacity of the Guyana Police Force so that today crimes in Guyana are being solved and are reducing.

It is pertinent to note here, that many of the people who rallied behind the PPP in recent times are those who enjoyed the fruits from the criminal cabal that ruled Guyana and those who enjoyed the crumbs that fell from
the table of the criminal cabal that constituted the PPP government. Gerry Gouveia included. Note the emphasis on the elite since the ordinary supporters of the PPP were not the main beneficiaries of PPP rule, it was the criminal under world, PPP elites, friends and family who benefitted. The innocent, hardworking and decent people such as Mr. Arjune at the New Building Society suffered at the hands of Jagdeo’s PPP.

While it is accepted that states only have permanent interests and not permanent friends, they cannot have so short memories that they can’t recall the injustices that were done by the PPP to the people of Guyana and how the PPP acted against the interest of humanity and what all peace loving people stand for.

All and sundry are aware that the PPP had, and continues ta have a deliberate policy of using their ill gotten gains to fete, entertain and influence some diplomats in Guyana. They have done it with reasonable success. But the time is nigh when the people of Guyana who believe in democracy and decency must fight the criminal cabal and ensure that diplomats coming to Guyana are on the side of the people.

It is time to end the socialization of some diplomats by the criminal cabal and restore diplomatic work that is aimed at pursuing the legitimate interests of the sending and receiving states.

As Guyana is now an oil producing nation, the propensity to illegality and or, access to oil resources at all cost by the PPP has increased, placing Guyana at the gate of the oil curse. We need to pull Guyana back and ensure that it stays on the present path of progress and development
Remember under Jagdeo’s PPP we were cursed without oil.