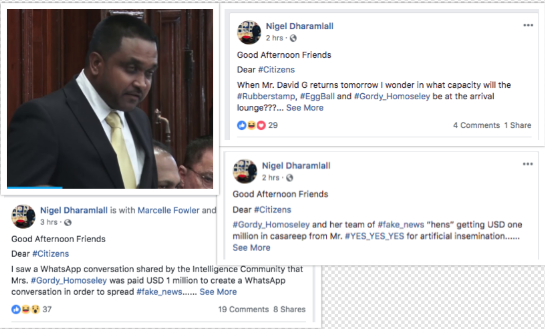 The obnoxious PPPC MP, Nigel Dharamlall, who himself has been accused of crimes that run the gamut of alleged child molestation, fraud, and naked abuse of power continues to spread hatred and bias on his social media page by targeting a local reporter with various homophobic statements.

He will of course not be censured by the People’s Progressive Party because they are crude, classless and cruel leaders, but even the simple among us have to wonder about a strategy which alienates more than 10% of the voting population. That’s about 20,000 votes Opposition leader Jagdeo.

We call on civil society, all international bodies and right thinking Guyanese to reject Nigel Dharamlall’s hatred and discrimination and to reject the People’s Progressive Party of bigotry and criminality.

May 3, 2014 – Stabroek News
Permanent Secretary (PS) Nigel Dharamlall surfaced in which he threatened to bar access to his office and withhold stipends from Amerindian leaders

November 29, 2015 – Kaieteur News
Nigel Dharamlall was CEO of Carifesta 2008 and sat on the board of NICIL for a number of years. – Hundreds of millions siphoned off from Carifesta account.