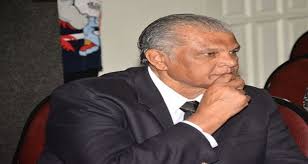 Khan who then fled to Surinam, was arrested in Paramaribo and subsequently handed over to the US authorities while in transit in Trinidad, to face charges for guns and ammunition crimes which he committed since 1992. Subsequently, President Bharrat Jagdeo appointed a commission to investigate Former Minister of Home Affairs Ronald Gajraj, who was suspended from duties following local and international pressure about his involvement with Khan and the Phantom Killing Squad. The commission reported it could find no direct link of Gajraj’s involvement in extrajudicial killings, and he subsequently resumed his post.

The U.S. State Department protested this action by the Jagdeo Government stating “We believe significant questions remain unanswered regarding his involvement in serious criminal activities.” Gajraj was then removed from his Ministerial Post and was appointed Ambassador to India. At this time, Ronald Gajraj and Floyd McDonald who was the Commissioner of Police, both had their United States visas suspended. Special Agent Cassandra Jackson of the United States Drug Enforcement Administration said in her affidavit to support the charges against Khan, “Khan was ultimately able to control the cocaine industry in Guyana, in large part, because he was backed by a paramilitary squad that would murder, threaten, and intimidate others at Khan’s directive.

Khan’s enforcers committed violent acts and murders on Khan’s orders that were directly in furtherance of Khan’s drug trafficking conspiracy.” Information from leaked US Embassy cables revealed that Roland Bullen, Former United States Ambassador to Guyana for the period August 14, 2003 to August 26, 2006, advised His government that Khan enjoyed the protection of the PPP government through Former Minister of Home Affairs Ronald Gajraj and former Head of the Presidential Secretariat Dr. Roger Luncheon. Ambassador Bullen met with Minister of Home Affairs Gajraj’s Successor and Chief Whip of the PPP Government Comrade Gail Texeira and concluded that the PPP government was comfortable with Khan because “he was on their side(SIC)”.

In a July 13, 2009, cable, the then Charge d’Affairs at the U.S. Embassy in Georgetown, Karen Williams, advised the U.S. State Department that the then Minister of health Leslie Ramsammy had strong links to Khan and as a consequence, the embassy was reviewing its relationship with the Ministry of Health. Political Activist Courtney Crum-Ewing who was constantly seen peacefully protesting in front of the Attorney General’s Chambers was assassinated a few nights before the 2015 general and regional elections. Witnesses have identified the perpetrator as a known security guard with affiliation to a former high-ranking PPP government official. It is estimated that there were 1,701 murders during the tenure of Bharrat Jagdeo.

Between the period of 2002 and 2006, 784 Guyanese were murdered, an average of 157 murders per year. I challenge anyone to double check these facts. How can we forget this period of absolute State- Sponsored Lawlessness, terrorism and Extra Judicial Killings that took place under the PPP? I have concluded that the PPP is a Mafia parading a Political party. Joseph Singh (PH.DBA)

2 thoughts on ““How can we forget this period of absolute State- Sponsored Lawlessness, terrorism and Extra Judicial Killings that took place under the PPP?” – Joe Singh”