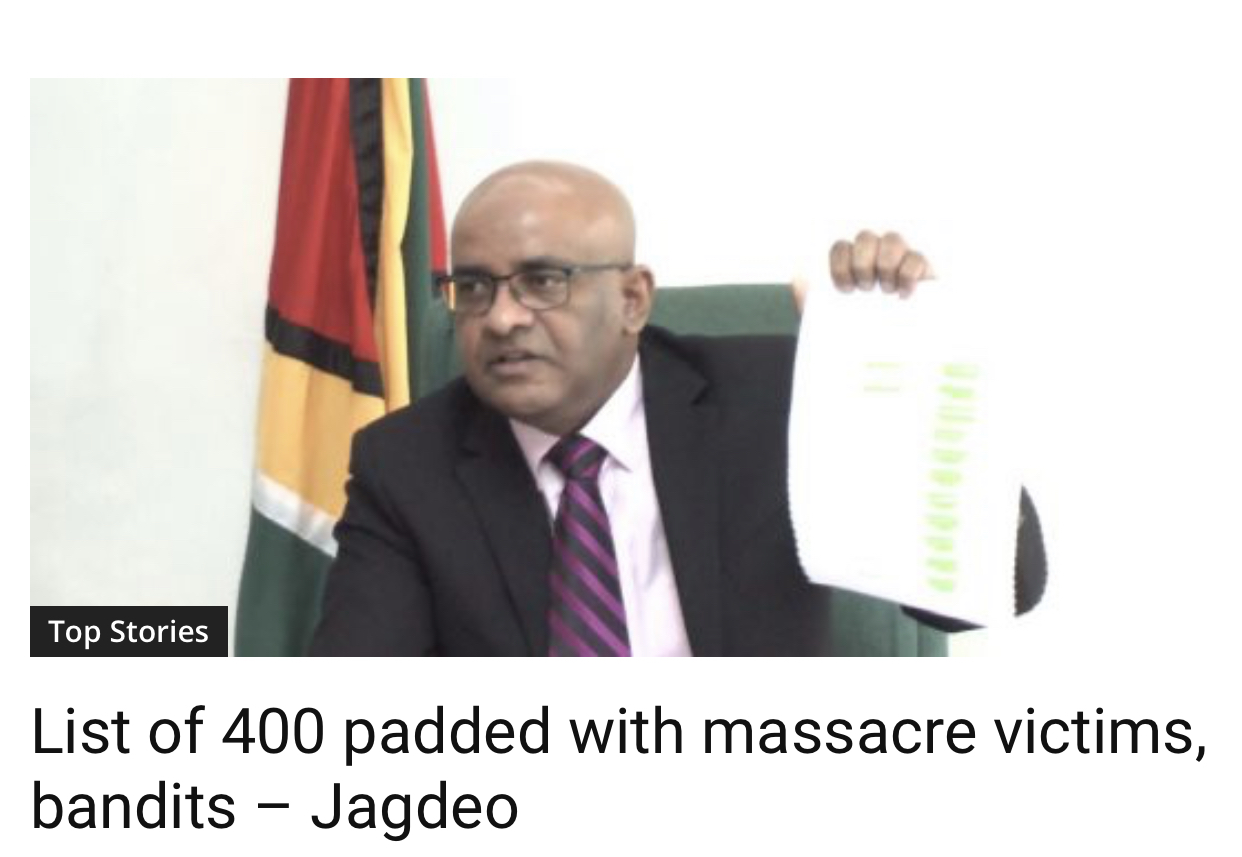 Georgetown, Guyana — Former President Jagdeo knows that there is no statute of limitations on cold-blooded murder.  He is becoming increasingly anxious about the  demands by Guyanese citizens both home and abroad, for justice for more than 200 mostly African mothers, who lost their sons to government sponsored murder.  His latest defense is that the 400 number as reported in the then opposition report is padded.  So we at guyanapolitics2020.com would like to ask him, what is the correct number of extrajudicial killings?  And just how many extrajudicial killings are acceptable to Jagdeo and his supporters?

The extrajudicial killings–orchestrated by former President Bharrat Jagdeo, approved by former Minister of Home Affairs, Ronald Gajraj, managed by former Minister of Health Leslie Ramsammy, operationalized by [then] commander of the Target Special Squad (TSS) Steve Merai and executed on the ground by Guyana’s number one drug lord, Roger Khan and his criminal gang–is Guyana’s greatest shame.  PPPC ministers and supporters are all complicit for their silence or rationalization of this evil.

USG Secret Cable – 2007 June 19
“Merai and the TSS were involved in extra-judicial killings dating back to the early 1990s. Later the TSS acted as enforcer for corrupt U.S. Vice Consul Thomas Carroll’s visa selling ring. After it was disbanded in 2002, many TSS officers ended up in the formal employ of narco-trafficker and “phantom” death squad leader Roger Khan. End Note.)”﻿

Once again, former president Bharrat Jagdeo is allowed to make absurd claims to an uncurious media as they continue to sit for his almost daily propaganda outpourings without much of a challenge.  Sadly the keepers of democracy, the fifth estate, just do not seem up to the task of keeping the opposition leader as accountable as they are committed to exercising control over the coalition administration.

Do any of the “important”, “decent” people in Guyana recognize the indecency, the criminality, the crimes against humanity for which former President Jagdeo and conspirators must be held accountable?  Today the business community embraces a criminal, invites him to address their audience, contributing to his attempt to reinvent himself.  Today the Guyana Human Rights Association remains silent, Transparency International remains silent, the Guyana Council of Churches remains silent; too many upstanding, decent people remain silent.  Our collective silence is our country’s shame.  Our silence gives consent to Jagdeo’s moral turpitude. Poor people’s lives do not matter in Guyana.

USG Cable – 2006 May 11
“Shaheed “Roger” Khan is Guyana’s number one narco-trafficker, but the threat he poses to U.S. national interests extends much further than just drug smuggling (ref C). He has brokered drugs-for-guns deals, sending weapons to the FARC for cocaine. He is reported to have social and operational links to Desi Bouterse, former Surinamese strong-man, convicted narcotics trafficker, and possible coup-plotter (ref B). Khan was a driving force behind the “Phantom Squad” that carried out extra-judicial killings with impunity in Guyana in 2002-03.”﻿