The nation’s response to Minister Volda Lawrence’s private joking with a few party members motivated our reporters to investigate PPPC’s own complicity in ethnic discrimination.  Our investigation lead us to a discovery of massive ethnic discrimination in the allocation of MMA leases.  The PPPC should be required to answer for this.

Guyanapolitics2020.com research discovered that Indian farmers were granted nearly 97% of the 99 year leases for farmland at the MMA/ADA development in region 5, a region where Indians are 52% of the population, and Africans 35% according to the 2002 Guyana census.  But this story is not about whether Indian farmers deserve the lands they occupy, it is about the process of granting lands, the unequal access to this opportunity by all races in region 5 and the way a historic and massive government project was used as a very effective political weapon by the ruling PPPC party.  This story is about how the new government will view these issues and what steps they will take to remedy this wrong.  Indian farmers deserve farm lands in region 5, but so do African farmers, Amerindian farmers and really all eligible Guyanese citizens with the expertise to farm the lands of Guyana.

According to their website, “The MMA/ADA was established in 1978 by Act No. 77 of 1977. The Authority was formed as the executing agency for the construction of all drainage and irrigation works in Region No. 5, Mahaica/Berbice on the north-eastern Atlantic seacoast of Guyana. The agency is also responsible for the allocation of State Lands between the Berbice and Mahaica Rivers.

The MMA/ADA was to provide water control for the coastal lands up to a distance of some 30 miles inland, by impounding the flood waters in surface reservoirs (conservancies) located in the upper reaches of the rivers, and through the construction of appropriate civil engineering infrastructure, provide drainage and irrigation (D & I) services to the areas nearer the coast.

Primary goals of the MMA/ADA are to manage, operate and maintain all drainage and irrigation works in Region No. 5, Mahaica/Berbice and to administer all State and Government lands for the benefit of farmers/residents and National Development. Overall, the MMA/ADA supports nearly half of the national rice production, about 30-35% of all livestock (most cattle) production and 10-15% of national sugar production.  The MMA/ADA is supposed to be a semi-autonomous agency under the Ministry of Agriculture,   governed by a Board of Directors.

Many of the farmers who continue to benefit from this more than $800 Million project which Guyanese taxpayers will have to repay have been issued 99 year leases for an average of five acres of land.  Under the PPPC, they paid a paltry yearly rental of Gy$2,500 / acre in areas where there are both primary and secondary drainage and irrigation while in areas where there is only primary drainage and irrigation, the rental was Gy$1,000 yearly, for an acre of land.

Monies collected as land rates, drainage and irrigation fees and other service charges are used by the authority to maintain existing infrastructure and fund the development of new infrastructure.

However, according to a June 24, 2016  Kaieteur News article, “Farmers have not been honouring that responsibility. I would say about 40 – 45 percent of the farmers are not paying. Even if they are paying they are not paying timely, let’s say they are required to pay $60,000 per year they might come and pay $10,000 leaving a big outstanding debt for land rent and drainage and irrigation charges.”  In addition, It has been disclosed that contrary to the lease agreement, many lessees are subletting plots leased from the MMA, at rates between 10 times and 15 times higher than that paid to the MMA/ ADA while not paying outstanding debts due.

Today, the only lands available in phase one of the scheme is “an area of about 15,000 acres of land close to the conservancy, an area called Herstelling. It has access, primary drainage and primary irrigation. If a person should get a piece of land there you will have to do secondary drainage, irrigation and access.”  Apparently, all of the lands with both primary and secondary irrigation completed has been allocated to the lucky farmers holding 99 yr leases today.

With regard to developing the available lands, the authorities need the funding. The development is described as “big money projects”. To develop that 15,000 acres of land and put in drains it will cost billions.”  The late or non-payment of land rates is seen as a major bugbear on the ability of the MMA/ADA to develop not only the available 15,000 acres in phase one, but phases two and three.\r\n

Why weren’t the developed lands in phase 1 allocated fairly among farmers of all races?
So today, a region where 35% of residents are African, we see that less than 3% of the land allocations were given to African farmers.  In a region where 52% of the residents are Indian, nearly 97% of the land allocations were made to Indian farmers.  What is the reason for this discrepancy?

The purpose of this report is to encourage the media in Guyana to solicit answers from the then ruling PPPC government, especially since they have recently made unsubstantiated accusations of racism towards the current coalition government.

Land is wealth.  Land generates wealth
This issue is not a minor one.  The allocation of land is very important as land is used to generate wealth for generations of families.  Land holders are able to use their lands as collateral to aid them to secure loans for farm equipment, supplies, livestock and working capital.  To the extent that we encourage bias or politics in land allocations, we then disadvantage an entire community of residents.

If you do not own land, you cannot plant, reap and sell to generate income.  You can’t secure bank loans and you can’t purchase livestock or supplies in large quantities.  Essentially you’re left out of the economic equation of the region.

Today, we call on the media and civil society personalities who belabored the Lawrence issue to get the PPPC opposition to explain the unfair allocations.

We believe that Indian farmers have a right to lands but so do African farmers.  We call for equal access to opportunity for all Guyanese and call on the coalition to help right this wrong by making more allocations available to African farmers in Region 5. 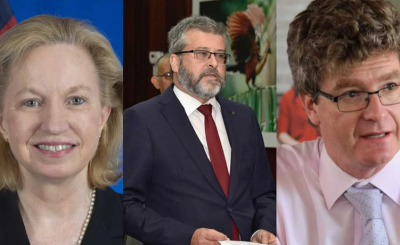