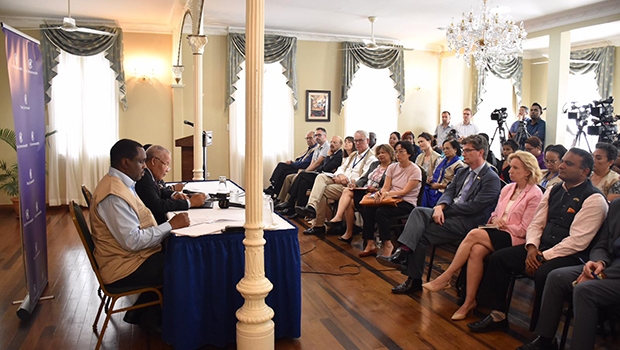 Keep in mind that before oil, the PPPC had not held local government elections in 23 years, they encouraged drug dealers and money launders to build huge building and to bolster the flagging economy, they encouraged the sanction of extrajudicial killings, the imprisonment of political prisoners, the killing of Waddell and Crum-Ewing and Linden protestors and THE CITIZENS OF GUYANA COULD NOT GET THE INTERNATIONAL COMMUNITY TO ISSUE ONE CONDEMNATION OF THEIR EVIL RULE.

How ironic it is that these powers do not have their own houses in order; the UK with BREXIT, the US with voter fraud and disenfranchisement of Black voters, Canada has a horrible reputation of oppression of its indigenous peoples; we can go on and on, yet they play a heavy hand in Guyana and even before the election has been called, ABC countries and observers have turned a blind eye to the massive fraud perpetrated by the PPP and they have interfered to the point where, the PPP emboldened, have encouraged their supporters to take to the streets, attack children, police and destroy property with impunity.

The end goal for the international community is to install their own grateful dictator into government. Granger cannot be controlled or compromised, so he is a threat to their plans. They already know that Jagdeo is power hungry and ruthless and that Irfaan is greedy, so they would be easy to control.

Jagdeo and Irfaan both would do well to remember that the deal they make with the international community is a deal with the devil. Jagdeo and Irfaan must follow the history about dictators around the world who were chosen and propped up by the world powers, things didn’t end well for any of them.