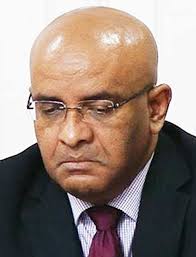 Former Guyana President Bharrat Jagdeo often states that the administration of former Finance Minister, Carl Greenidge, mismanaged the economy prior to 1992, but according to Christopher Ram, this is a myth.

As a matter of fact, under the Presidency of Bharrat Jagdeo, Guyana borrowed more and there is evidence that growth declined steadily.
Writing in his online blog chrisram.net yesterday, prominent accountant and lawyer, Christopher Ram, argued that Greenidge, a Finance Minister in the People’s National Congress (PNC) administration, has been one of the chief targets of the PPP/C since 2011 for what they claim to be his mismanagement of the economy prior to 1992.

“This claim is at best one-sided and at worst totally dishonest, completely ignoring the performance of the economy when Greenidge demitted office in 1992. Perhaps as the calypsonian Chalkdust sang: “they ‘fraid Carl”.
Ram said that it must be noted that Economic Recovery Programme (ERP) which the PPP in opposition had dubbed Empty Rice Pot was not replaced after the party won the elections in 1992. “…why did they not replace it?

The truth is that the ERP negotiated by Greenidge with the IMF and other international lenders and donors placed Guyana on a trend where its economic growth rate was well above anything the country has ever witnessed, before or after.”

Ram said that Asgar Ally, the PPP’s Finance Minister, riding on the wave of debt write-offs initiated by

Greenidge, “kept the economy roaring until he was undermined by then Junior Finance Minister Bharrat Jagdeo.”

Ram went further. “Following the appointment of Jagdeo as Finance Minister, the economy went into reverse, a trend which continued with his micro-management of the economy when he succeeded Janet Jagan as President in 1999.”

Backing his arguments, and using figures from the Bank of Guyana, the accountant noted that in October 1992 when Ally took over as Finance Minister, the Gross Domestic Product (GDP) which measures growth, was growing at 7.7% following a 6.1% growth in 1991.

However, the economy recorded its first decline in the decade of the nineties under Jagdeo as Finance Minister, an underperformance repeated for three years between 2000 and 2005 under his presidency.
Ram has been highly critical of the Government and the management of the economy for a number of years now, in his online blog, television program and newspaper column. A number of privatization deals by Government and large scale infrastructure projects have also come under his scrutiny.
“The PPP/C would also have the nation believe that their Government paid off the debts inherited from the PNC. The reality is different. As a result of the economic recovery programme constructed by Greenidge, Guyana benefitted from substantial debt write-offs even as the PPP/C engaged in its own borrowing spree, both locally and internationally.”

1 thought on ““Under the Presidency of Bharrat Jagdeo, Guyana borrowed more and there is evidence that growth declined steadily.”