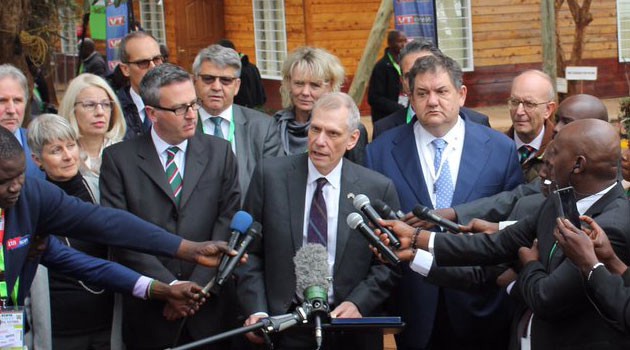 Georgetown, Guyana – Former president Bharrat Jagdeo who is responsible for presiding over the most criminality and murders in Guyana’s history, today begs Western diplomats in Guyana to be party to his conspiracy and criminality.

This is the same man who sanctioned a Priya Manickchand ‘cuss out’ of the American Ambassador, who refused the help of the UK in overhauling Guyana’s crime fighting strategy and infrastructure and who refused the support of the US drug enforcement agency when they attempted to create an office in Guyana. Western countries know all too well of Jagdeo’s criminality, it is well documented in wikileaks.

19. (C) Multiple sources have expressed fears to Ambassador that not only has Khan penetrated almost every level of Guyanese government and society, but that he will exert ever greater influence over the political scene beginning with this year’s elections. Most respected commentators believe that Guyana has already become or is well on the way to being a narco-state. If Guyana is a narco-state, then Khan is its leader. Ambassador has spoken with GoG to little avail about Khan’s drug activities and unaccounted wealth. The GoG has adopted a head-in-the-sand approach to Khan and narco-trafficking in general. The GoG asks for hard evidence and pretends not to know how Khan acquires his means.

The citizens of Guyana expect their government to challenge this evil conspiracy to destabilize their democratically elected government. The people must not be disenfranchised. Jagdeo can bellyache all he wants, but justice must run its course. Whether Jagdeo allows his MP minions to attend parliament or not, is immaterial at this point. The budget has been approved, the constitution allows for the coalition to remain in power for the next 90 days and the people’s business will be conducted.